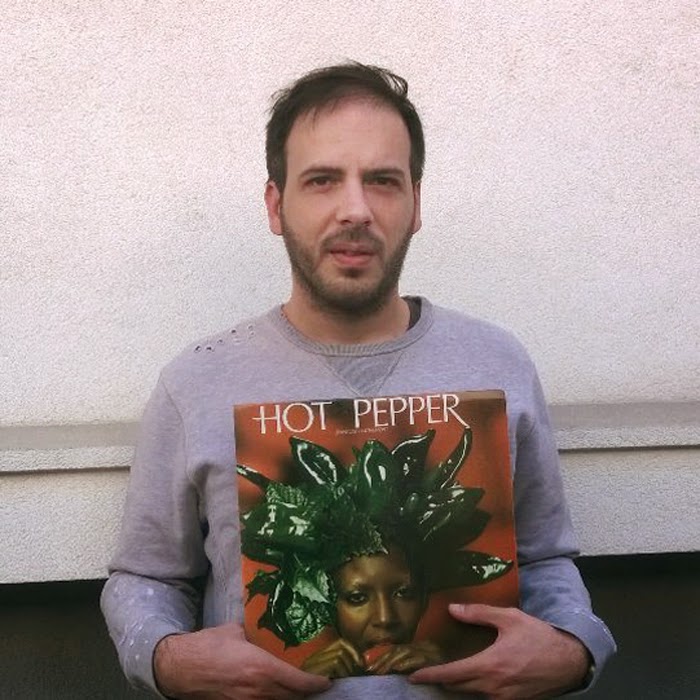 “Spanglish Movement” is the one and only record by the Mexican band Hot Pepper.
I don’t know too much about the band or the album; the Internet does not either or maybe I’m searching it wrong, give it a try. There are several references out there claiming it was released 1978, but there is no evidence for that on close inspection of the record.
Getting a copy was close to impossible (read excruciating), but this will soon change to “far too easy”. Repress is literally just around the corner, lucky-you! Let’s hope we’ll learn more on this occasion about the band and their story.

*
A1 - Deja Que El Mundo Sea Feliz Otra Vez (Let the World Be Happy Again) – this is one of my all-time favorites and I feel anything I would say about it will sound plain dumb. It’s simply too beautiful, too naive and too rare.
*

A2 - Camino Equivocado (Wrong Way) – I believe this is about driving long empty roads in the desert at night, asking yourself if you got lost or not, unsure on destination, having just escaped from some edgy situation in a bar.
*

B1 - No Me Presiones (Don't Push Me) – have a band play this in some truckers’ bar in Mexico and people will really turn into vampires and start eating man.
*
B2 - Cancion Ritual (Ritual Song) - all I can say is it really scares the shit out of me 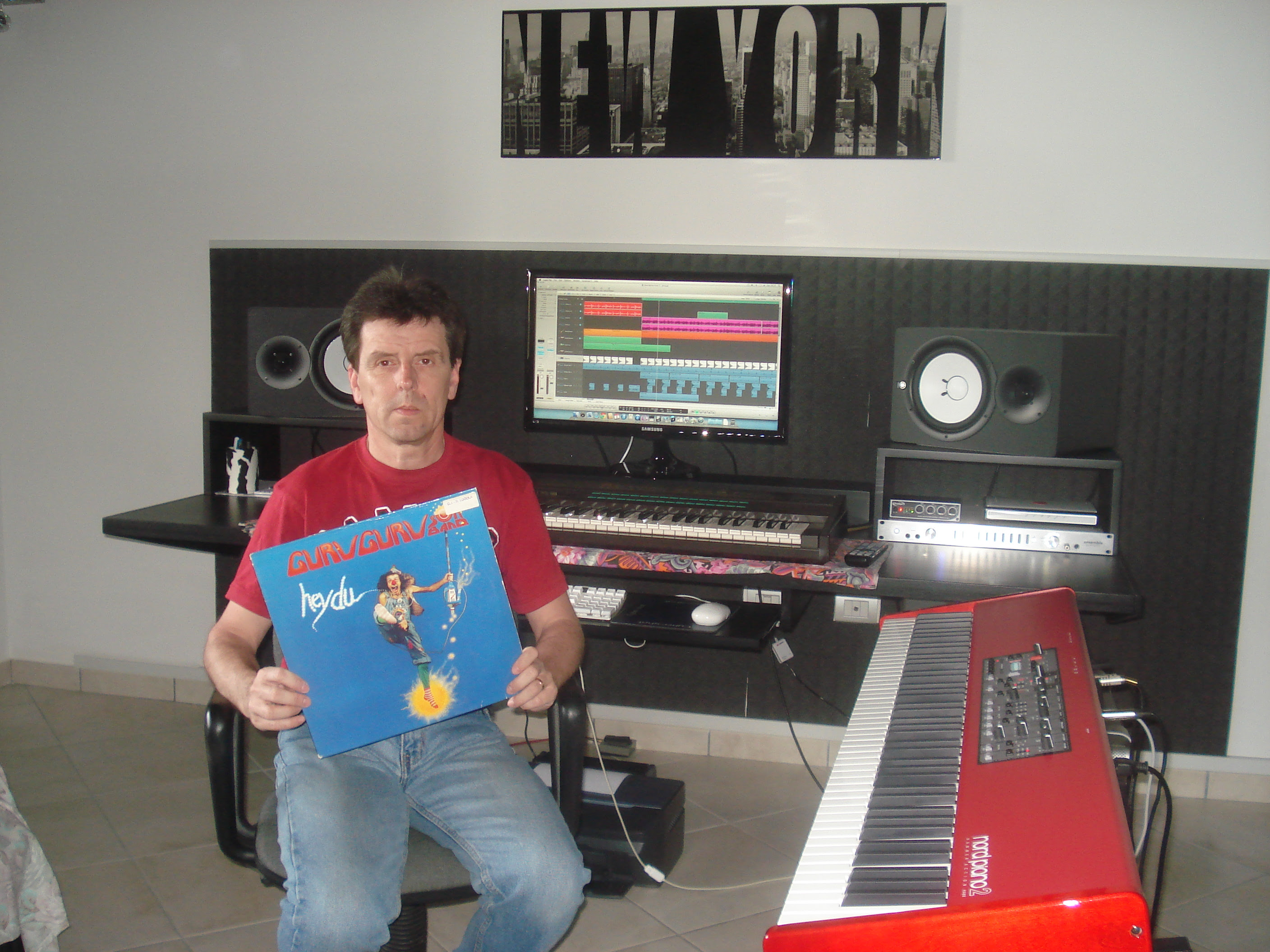 Roberto Lodola is a DJ , composer and Italian record producer. His career began at the disco Mondo Blu of Busseto (Parma) on 1982- He’s certainly one of the main famous deejays promoting a musical genre called “Afro-Funky-Cosmic”, a mixture of several musical strands like : Electronic, Afro, Funky, Disco, Jazz Fusion, Blaxploitation, Rare Groove, Oriental, Reggae, etc…. His continued research of records, not properly created for the dance floor, addressed him, early in his careers, to approach the Brazilian music, which he inserted immediately in his musical playlist.

In the early 80’s, he started to collaborate with the African percussionist George Aghedo, that often played his percussions together in his DJ sets in the disco Futura in Parma. From this collaboration arose several successful recording productions, such as “Helen - Zanzibar”, that became theme song of a TV program on Channel 5 and Marimba do Mar (!!!), republished on 2013 from the Japanese label Let's Get Lost (Mule Music –Tokyo) (with two new great edits by KZA & COS/MES, we might add). In the year 1983, he introduced the analogic synthesizer Roland SH101 and the electronic drums, then, since 1987 started using the sampler in order to make arrangements and real live remixes.

Just experiencing these new techniques, on 1991 created “African Rhythms”, that was published under the pseudonym “Rhythm Factory”, This production had a great success in UK, so that the version “ A Touch of Jazz” attracted the attention of Gil Peterson. In 2005, the song was included in two prestigious international compilations: the French "Saint Germain des Prés Cafe' vol.7" label Wagram (Buddha Bar) and the London-based "Get this party started!", on the “Expansion”.

In the early 90’s, his relentless pursuit of music, pushed him to the renewal of all strands in the landscape "Afro Funky-Alternative Sound", which had already' treated previously. Consequently he started 'to propose songs with  more' modern sounds, but in line with the past and, as a good lover of Brazilian music, he played the newborn “Samba Reggae / Axe” , creating a genuine trend, which  influenced the new  line of alternative discos, called “ New Afro Style-Ethno Beat-World Music”, that he carried out as a resident DJ for more' than 15 years at the disco Primastella of Bergamo. In 1994, together with his wife and art director Francesca Costantini, coined 'the brand Afro Trend Italy, with whom he identified the major events organized by them. Since 2008 he start 'the project of One-Night 70 No Limit, dedicated to music Funky, Obscure Disco, Nu Disco and Rare Groove, who still collect a huge success. In addition, since 2010, Roberto selected and mixed  various compilations “Funk and Disco” for the Milestone Records label. Today he played music in over 250 Italian and European clubs

Posted by Rocky Siffredo at 3:45 AM 3 comments 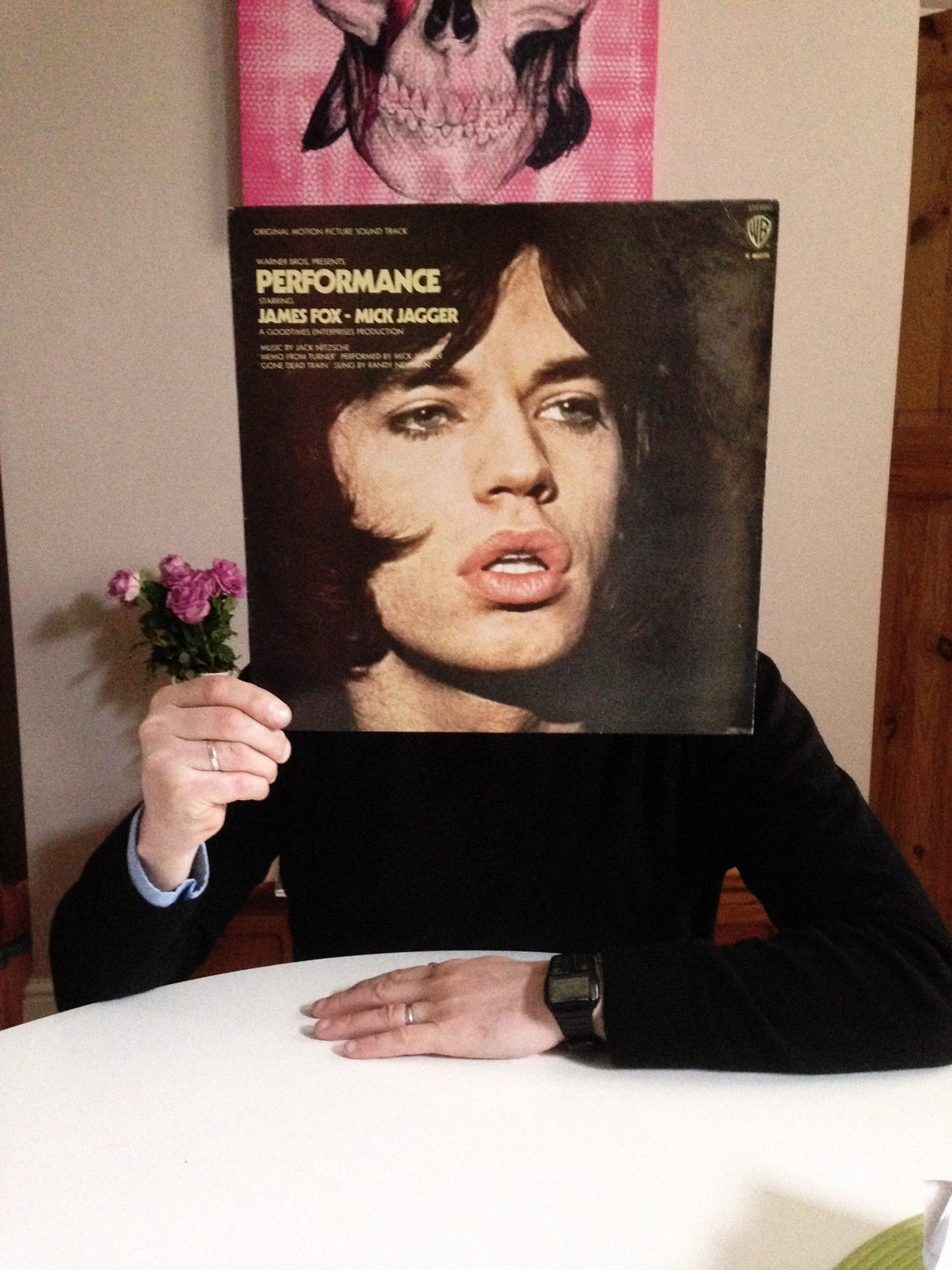 Performance is in my all time top 5 films ever and the soundtrack is a magic selection of music.
The film & soundtrack have a special time in my life when me and some friends lived in a shared house and we used to watch this film on a nightly basis. It was actually recorded from a Sunday evening showing on BBC2 and Alex Cox‘s Moviedrome film nights I was only 18 at the time maybe 17.
The story behind the soundtrack is filled with even more bizarre turns as Anita Pallenberg was going out with Keith Richards but played Jagger’s girlfriend in the film, which by all accounts was a bit too real! James Fox had to have 5 years out of acting after this film saying it had played with his mind a bit too much.
Getting back to the reason I chose this as a favourite is I never tire of it the two songs you can hear Memo From Turner & Poor White Hound Dog sang by Merry Clayton are just stunning songs.
If you haven’t seen the film or heard the soundtrack jump in have a watch and take a listen it is a thing of pure beauty.
Andy Pye

Come now, gentleman, your love is all I crave.
You'll still be in the circus when I'm laughing, laughing on my grave.

Posted by Rocky Siffredo at 12:17 AM 0 comments

Posted by Rocky Siffredo at 4:13 AM 0 comments 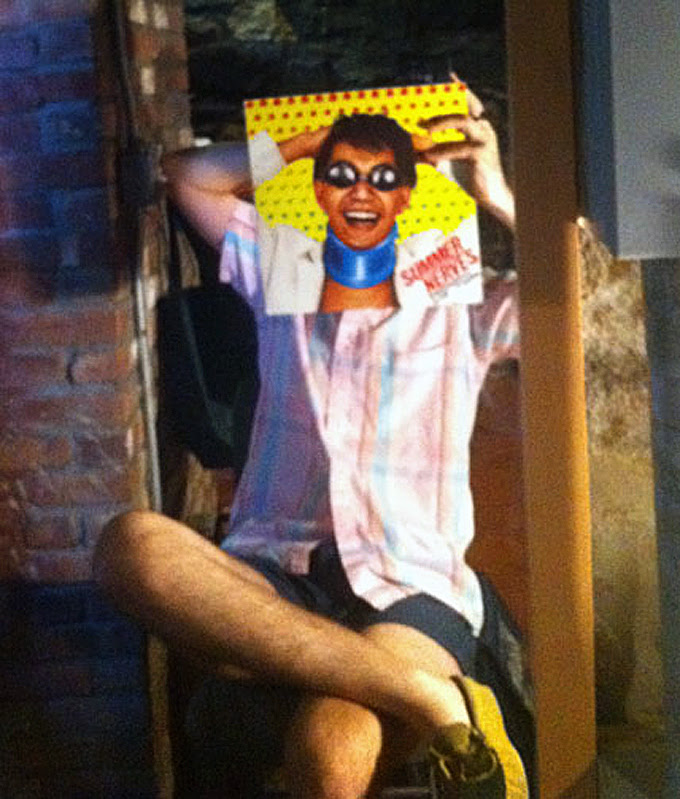 "A wonderful record and a classic in the fake reggae cannon. Hard to pick a favorite track. He was obviously feeling pretty irie on Gonna Go to I Colony, but the vocoderized version of Sister Sledge's You're a Friend to Me will wrench your robot-heart. Honorable mention goes to the more disco Theme For Kakutougi which was the theme song for wrestling on Japanese TV." 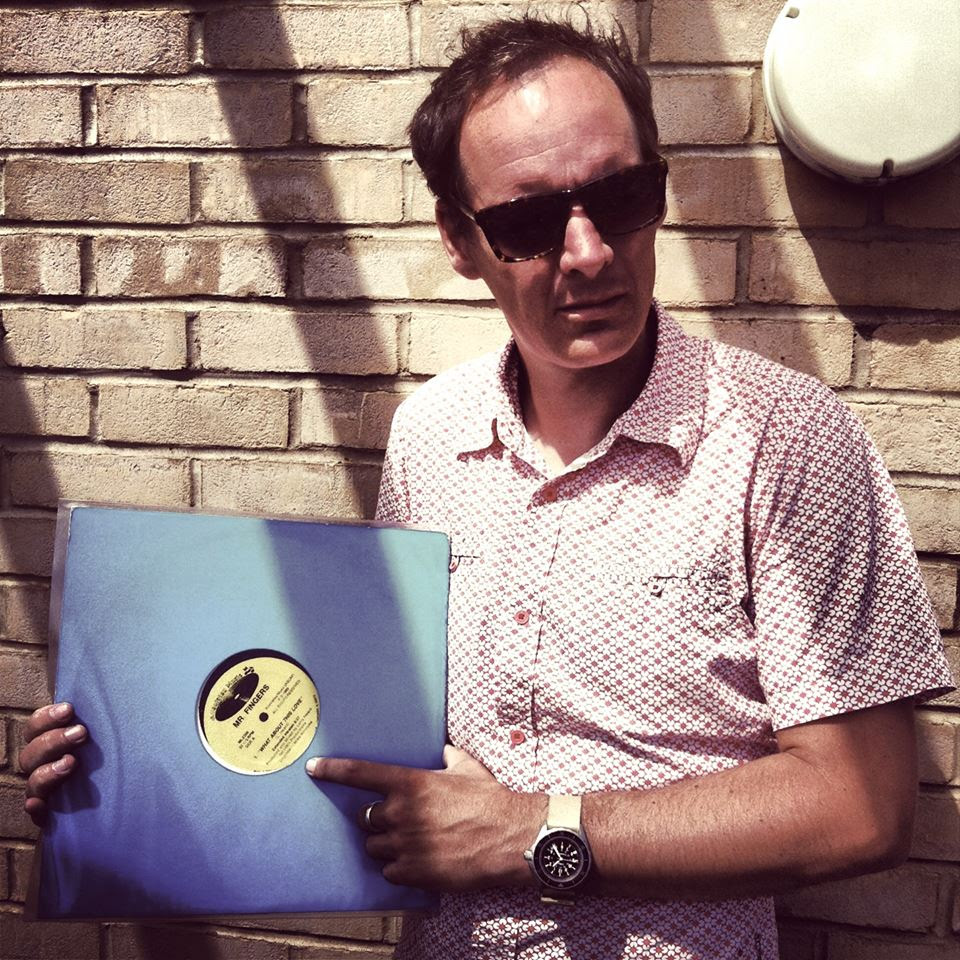 "To choose a record which represents me is an incredibly hard thing to do. I collect a lot of old and new music of many many different genres. However, I think this one sums up my whole style, swagger and passion for underground dance music. It's never ever left my record box in over 20+ years. I've closed endless endless parties with it and I think if you played this to any one of my close friends... They would simply smile and say Mr Lee. I would dance with my mum to this record, I would hug my girlfriend whilst dancing on the dancefloor and most of all share some hugely warm cuddles from people on the floor. It doesn't get much better than this in my book - And utterly utterly timeless. This is my record of choice and one you simply cannot ignore." 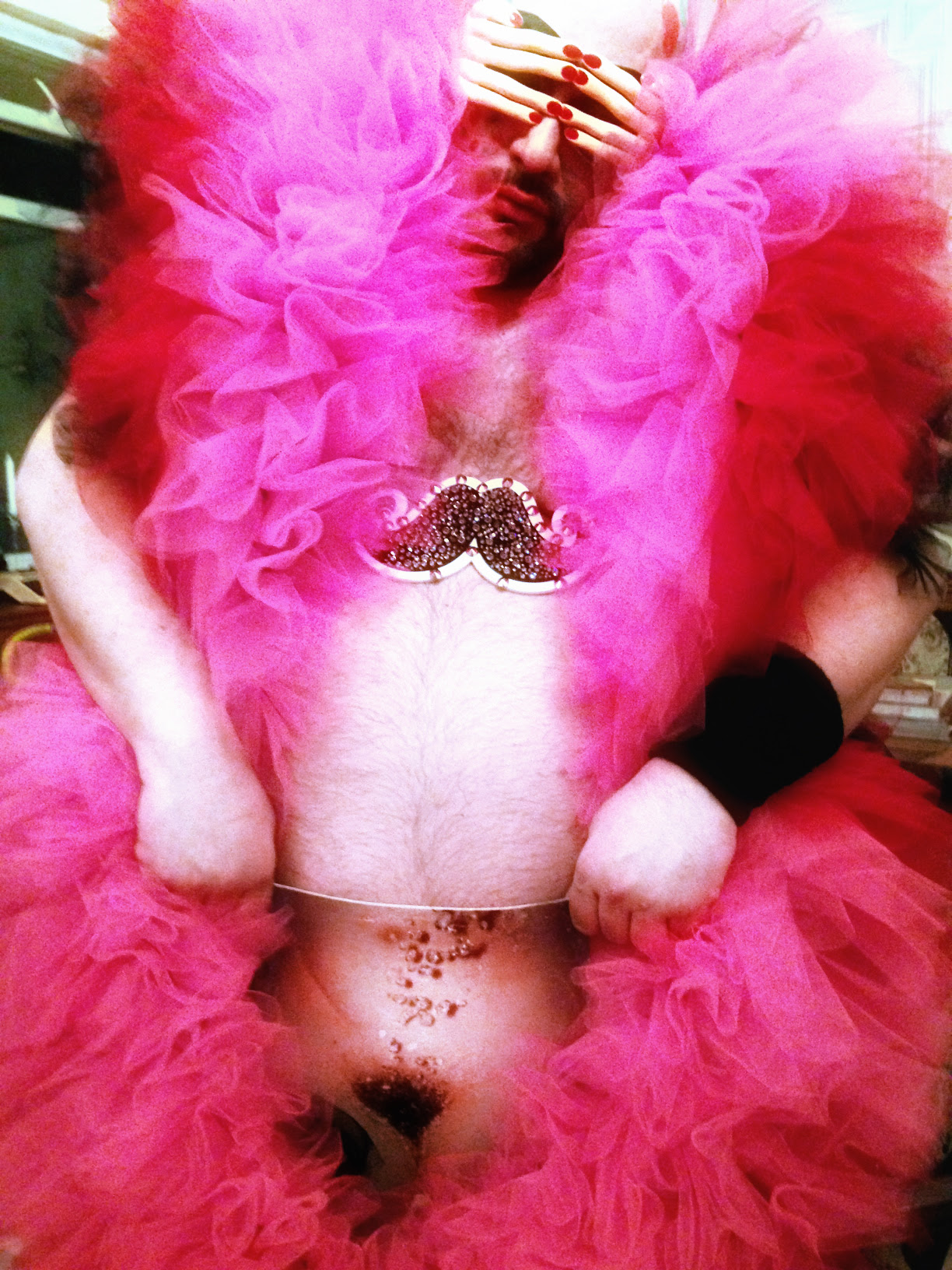 Last week I had the chance to see for the first time a Hart Ton performance in Bucharest in Control Club and not many words can describe what i have witnessed, my jaw dropped from the beginning of the concert and Hard Ton was BEAUTIFUL! Some might find this exagerated, but the closest comparison that came in mind was a huge orchid that was dancing under the changing colours of the spotlights...i'm not kidding! :) for me it was one of the best performances I have seen.

Really honoured that we snapped a photo for the blog and Hard Ton's choice was Malaria! vs. Chicks On Speed ‎– Kaltes Klares Wasser.

"The remix by The Modernist was an anthem for us. Useless to say we've chosen that record mostly for the amazing cover (it's actually really the pussy of one of the girls of the band)"

Another gift from Hard Ton is this track: